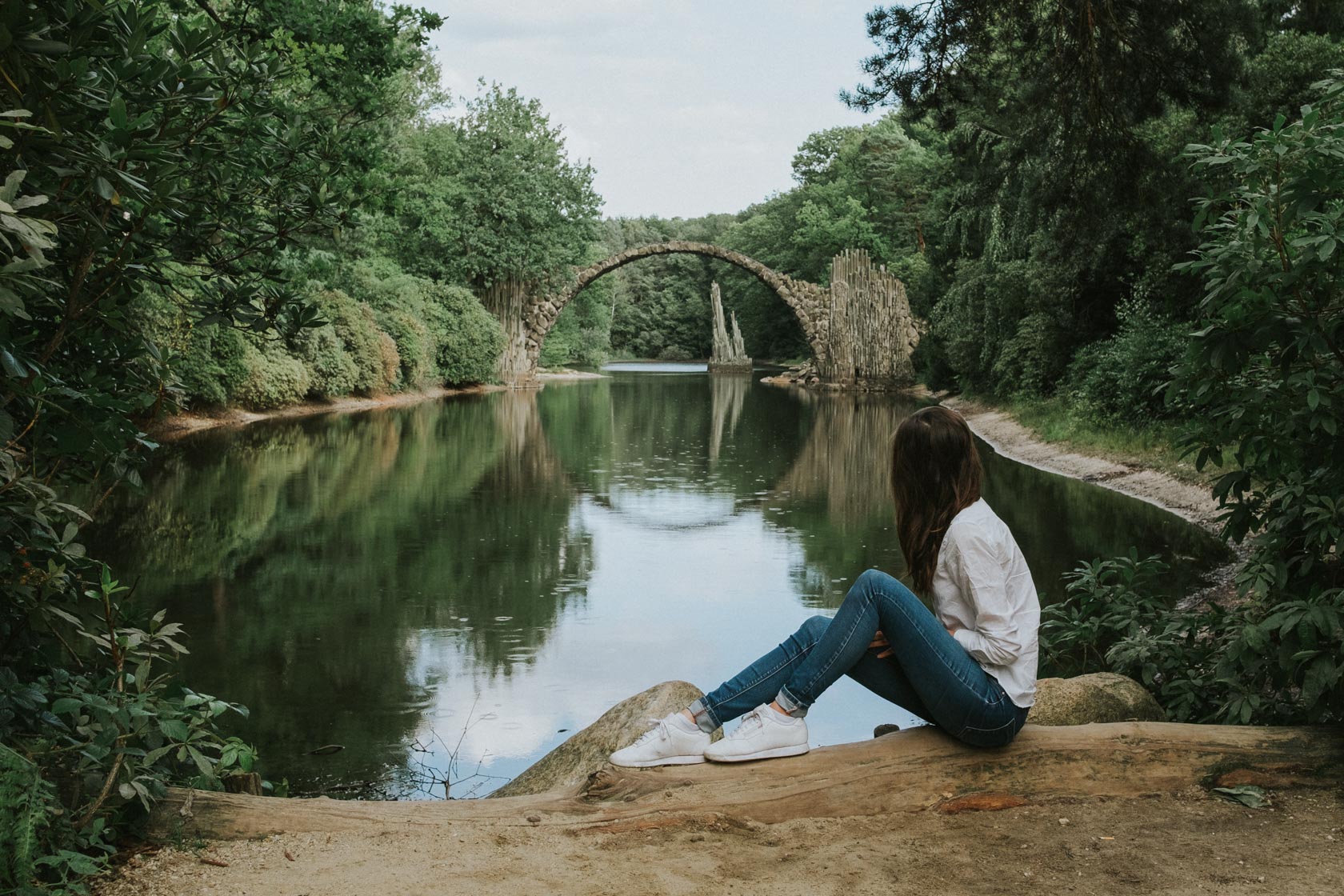 Crossing the Devil's Bridge in Germany

When’s the last time you were going about life, and suddenly felt as if you’d fallen into a fairytale? When I set out to see Rakotzbrücke last weekend, I expected to take some cool pictures, but I did not expect to be so enchanted by the pure perfection of this bridge and its jaw-dropping 200-acre surrounding park. Being there in Autumn took the landscape to an entirely different level – somehow I timed it perfectly with the most vibrant Fall foliage, just a week or two before the trees will surely be bare. I feel so lucky to have made it at just the right time!

A gravity-defying bridge like this could only come from a deal with the devil – if medieval legends are to be believed. Devil’s bridges exist all over Europe, with nearly 50 in France alone. Most of these bridges were build between 1000 and 1600 CE, and were modern marvels at the time of their construction. While Rakotzbrücke may be one of the finest examples of a Devil’s bridge, it’s by far not the only one.

The legend behind the devil’s bridge

According to some, the legends behind these bridges developed separately all over Europe. In most cases, the bridge builder and the devil are adversaries – the builder makes a deal that the devil will build the bridge in exchange for the soul of the first living being to cross the bridge. Usually, the builder finds a way to outsmart the devil by luring an animal across in order to spare a human life.

The legend of Rakotzbrücke ends differently – upon the bridge’s completion, the builder himself walked across the bridge and gave his own life in return. After all those years of getting tricked, I’ll bet the devil was pretty happy that one of these deals finally paid off! 😂

Kromlau has got to be one of the most remote places I’ve ever visited. The highway goes straight through the main street of the town, which is so small you could probably hold your breath the entire way through. My first indicator that the town would be small came from the fact that my cell phone signal got significantly poorer as we approached – until the fateful “No Service” indicator took up residence on the screen. Yep, I’ve made it to the countryside. 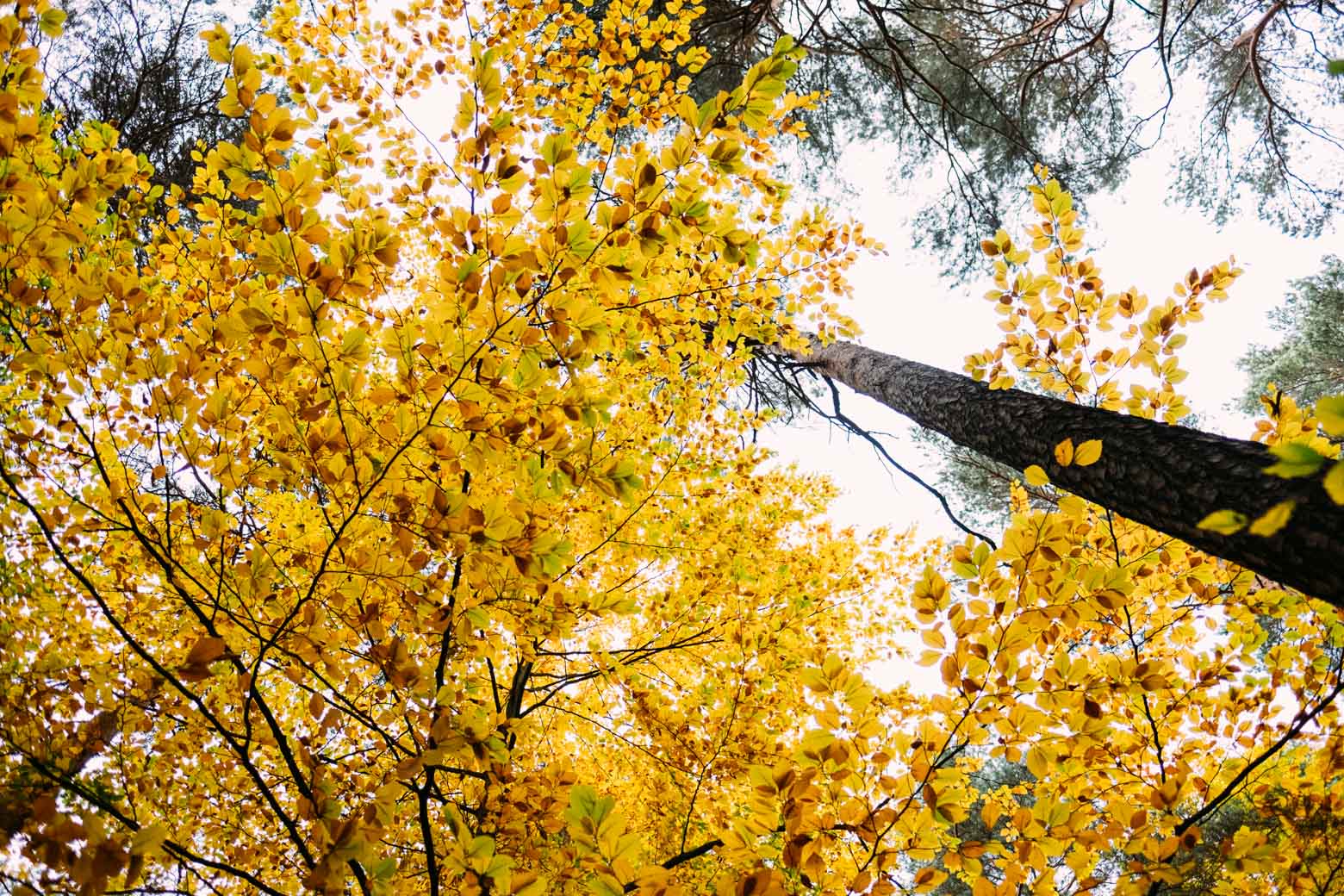 The park was comissioned by a knight named Friedrich Herrmann Rötschke (1805-1893), who was inspired by the nearby Bad Muskau (now a Unesco World Heritage Site). Both are modeled after English landscape gardens.

In 1889 the estate was acquired by another knight, who comissioned a horticulturalist a few years later, who was responsible for adding azaleas and rhododendra to the park. When you come to the park today, you’ll also see cypress, magnolias, and catalpas – not to mention countless varieties of mushrooms growing up from between the Autumn leaves. 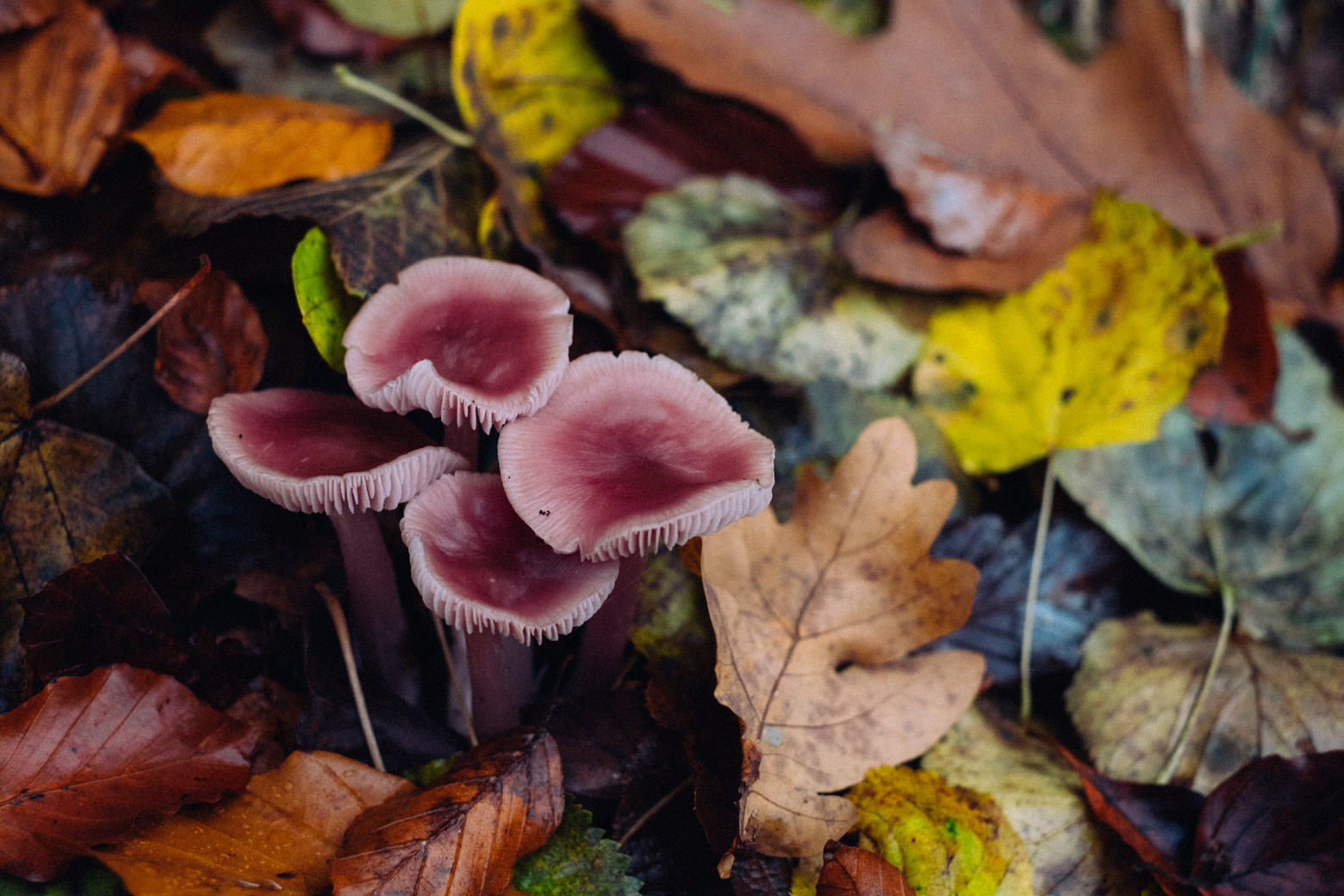 After World War II, Kromlauer Park was nationalized, and became free to visit (you just have to pay for parking) and as a result, it’s always open. The official website for Kromlauer Park mentions the opportunity of camping, as well as riding horses throught he park (as a result: watch where you step 😉)

There are so many things that make Rakotzbrücke a superior example of a devil’s bridge. The most obvious is the reflection in the water – of course, bridges often cross water, but this is the only one I’ve seen where the bridge is so narrow that it truly forms a perfect circle when the water is still.

According to the chronicler, the bridge cost “fifty thousands dollars and a human life.”

When I was in Lucca, this Summer, I’d been hoping to visit Ponte del Diavolo (Devil’s bridge in Italian) at Borgo a Mozzano . Now that I’ve been to the devil’s bridge here in Kromlau, it’s hard to imagine that one beating it – the symmetry is pretty much unmatchable in my book.

The stones comprising the bridge are fieldstones as well as basalt, much of which came from quarries in the Sächsischen Schweiz, a mountain range in Saxony, Germany. Some of the stones have origins as far away as Scandinavia, and the bridge itself is one of the few parts of the park that did not use predominantly local materials.

Here you can see another tiny bridge that leads to the larger one, referred to as the Kleine Rakotzbrücke.

A small disclaimer: It is not permitted to cross the bridge. There are signs informing you that it could be life threatening – though of course, the real reason is probably to keep maintenance costs down, not that the structure of the bridge is not sound (though, to be fair, the bridge is approaching 250 years old).

Other attractions in Kromlauer Park

Definitely don’t miss the rest of the park because you can’t get past the mesmerizing bridge. Here are some of the other interesting sights strewn around the park. It helps to snap a photo of the map at the parking lot, but there are also helpful signs to point you to the main sights.

Kromlauer Park’s full name is Rhododendron Park Kromlau and for good reason – it’s got a lot of Rhododendra. Typically, rhododendra flower in later Winter through early Summer – meaning, if you come in Autumn, they’re all dead. Just have a look below at the wispy bits on either side of the bridge: 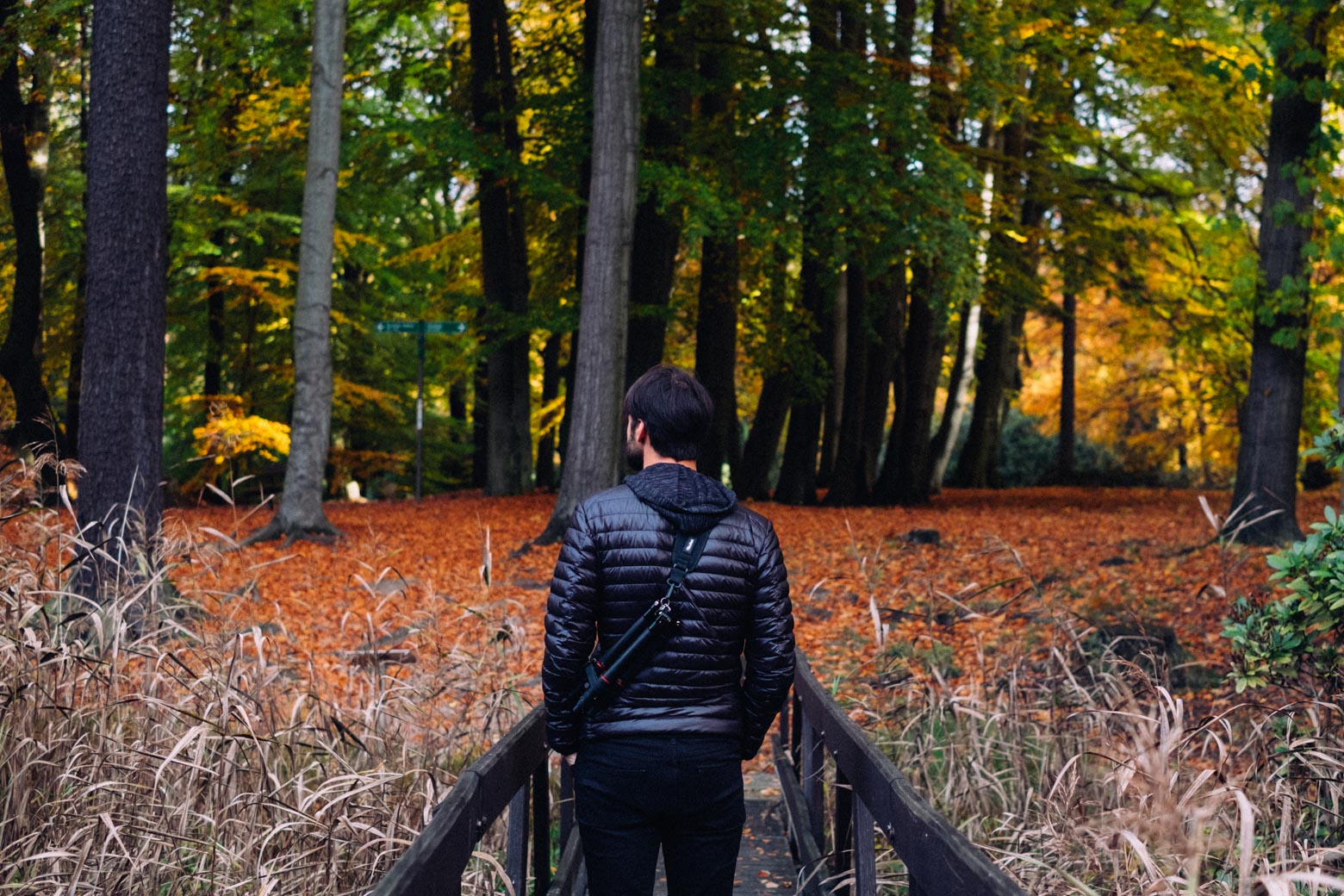 All around the park are flower-filled Schluchten (German for gorge or ravine, in this case corresponding more to swamp!). If you happen to be here when they’re in bloom, you’re in for a treat – there are tons of ponds and small lakes which would typically have flowers jutting out of the waters surface. I will definitely be back when they’re in bloom – I can barely imagine how beautiful it must be! 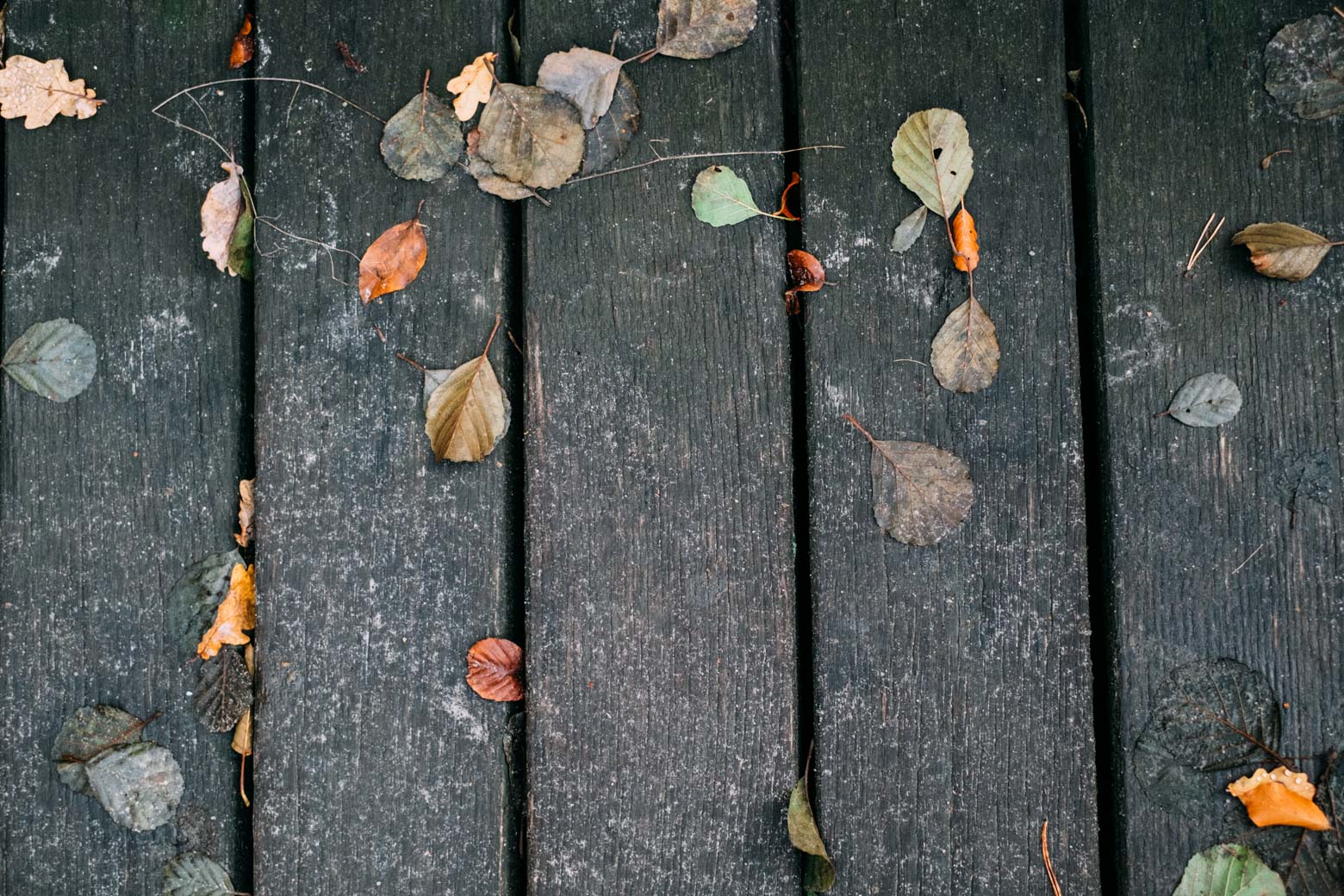 I feel like the front of this house could be the set of a Jägermeister commercial – the stags stationed out front would lend themselves perfectly. The Herrenhaus (also, perhaps exaggeratively called Schloss Kromlau, or “Kromlau Castle”) serves several functions today: it houses the tourist information office, which is only open for a precious few hours during the day, as well as vacation apartments! If you want to catch the bridge in the early morning light, why not stay here? During the high season, it costs 90€ for one night, or 80€ per night if you stay two nights. In the winter these costs drop by 20€ respectively. You can get more information about staying in Schloss Kromlau here (in German). 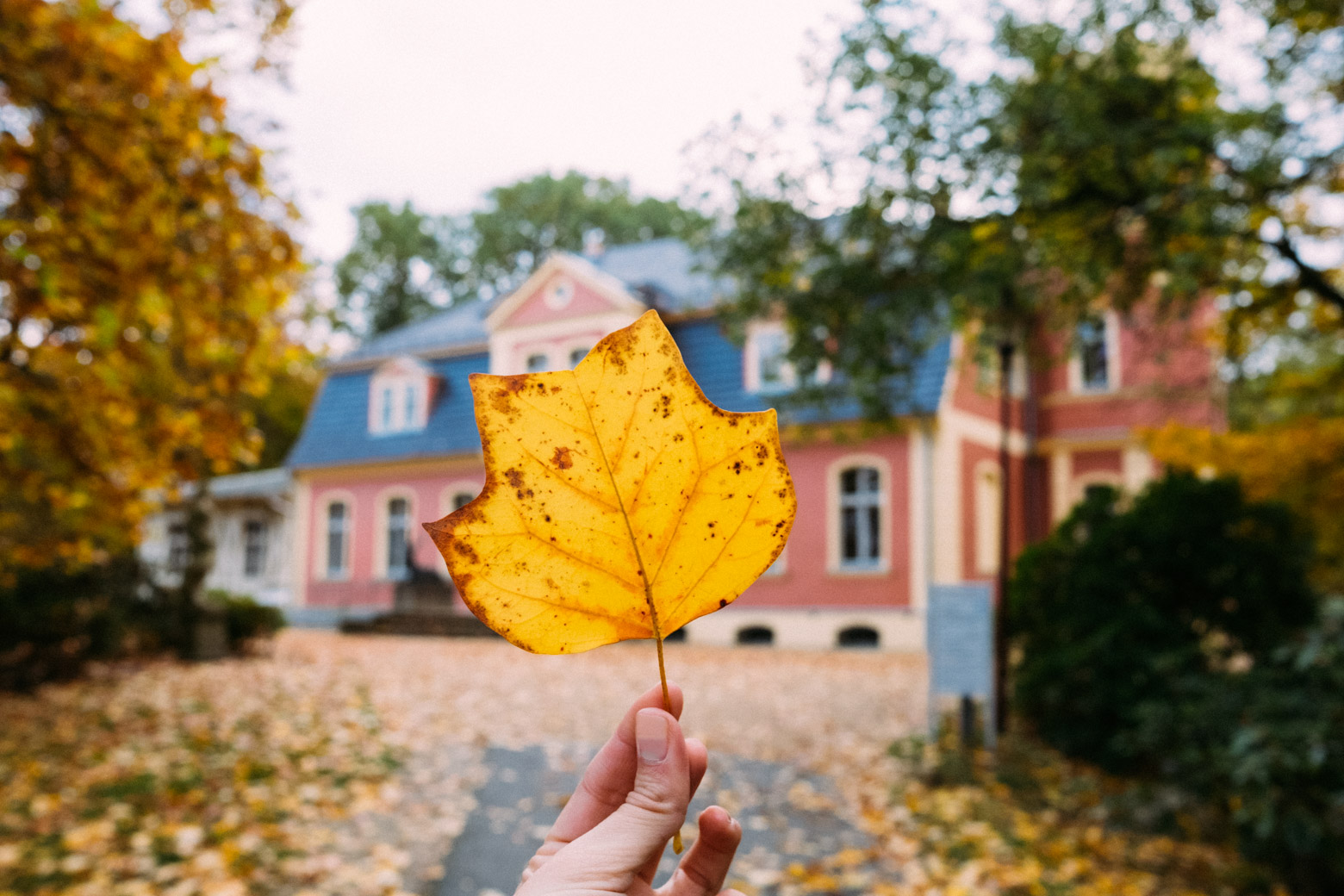 It’s not so usual to find a castle decked out in pastel colors, but I thought it was picture perfect! Two stags stand guard outside the front door to greet visitors – or kissers. 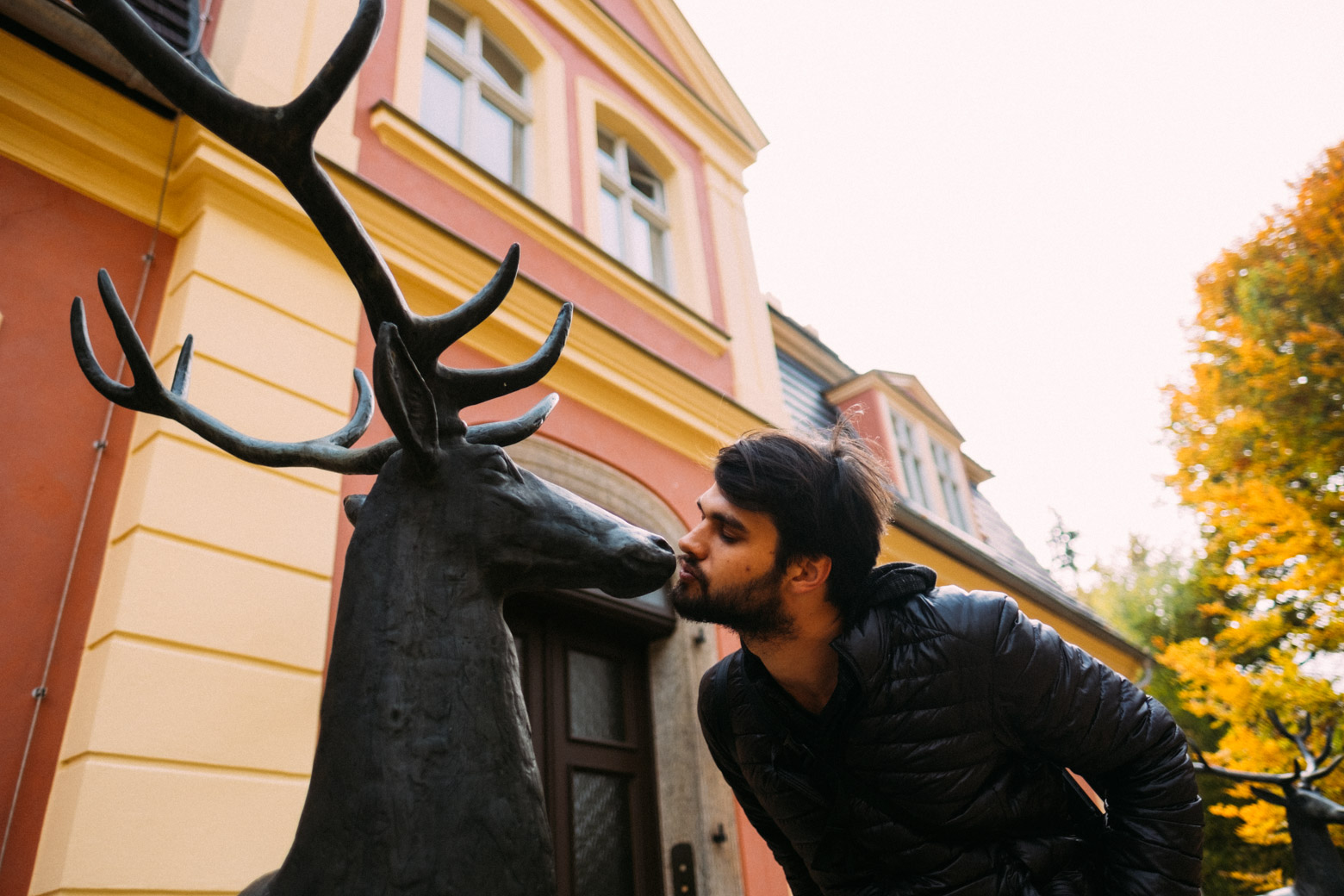 How to get there

As I mentioned before, Kromlauer Park is free to visit and you only have to pay for parking: 2€ for two hours, and 1€ for each hour after up to a maximum of 6€ for the whole day. The trickiest part of the whole thing can be getting here, especially if you want to do it exclusively by public transit.

With a data plan and Google maps by your side, reaching Kromlauer Park is pretty simple. From Berlin, you just take the Autobahn in the direction of Dresden, and when you start to see signs for Cottbus, take those instead. You’ll then see signs for Bad Muskau, which you can follow directly into the park (the park is bisected by this road). You’ll see a parking area, easy as. Just be warned that in some resources, the park is listed as being part of Gablenz, but in fact there’s more than one instance of Gablenz on Google maps.

I haven’t taken it myself, but the key seems to be taking a train to Cottbus from anywhere else (most often Dresden or Berlin). About 2km from the Cottbus main station is the Waldeisenbahn, a steam railway line. If you ride this train, you have the opportunity to see the Muskau wetlands (which also hold a UNESCO title). You have to check timetables on the Waldeisenbahn website, as the train does not run year round.

In short: most reports are that with public transit, coming to Kromlauer Park is a full-day event, whereas by car you can do it in half a day.

If I weren’t living in Berlin, I’d say that a visit to Kromlauer Park can be easily built in as a day trip from either Berlin or Dresden. You’ll spend a lot more time using public transit to get here, so it’s more feasible as part of a short trip to Germany provided you can rent a car. My car rental was about 80€ booked the same day, including insurance, not including gas. 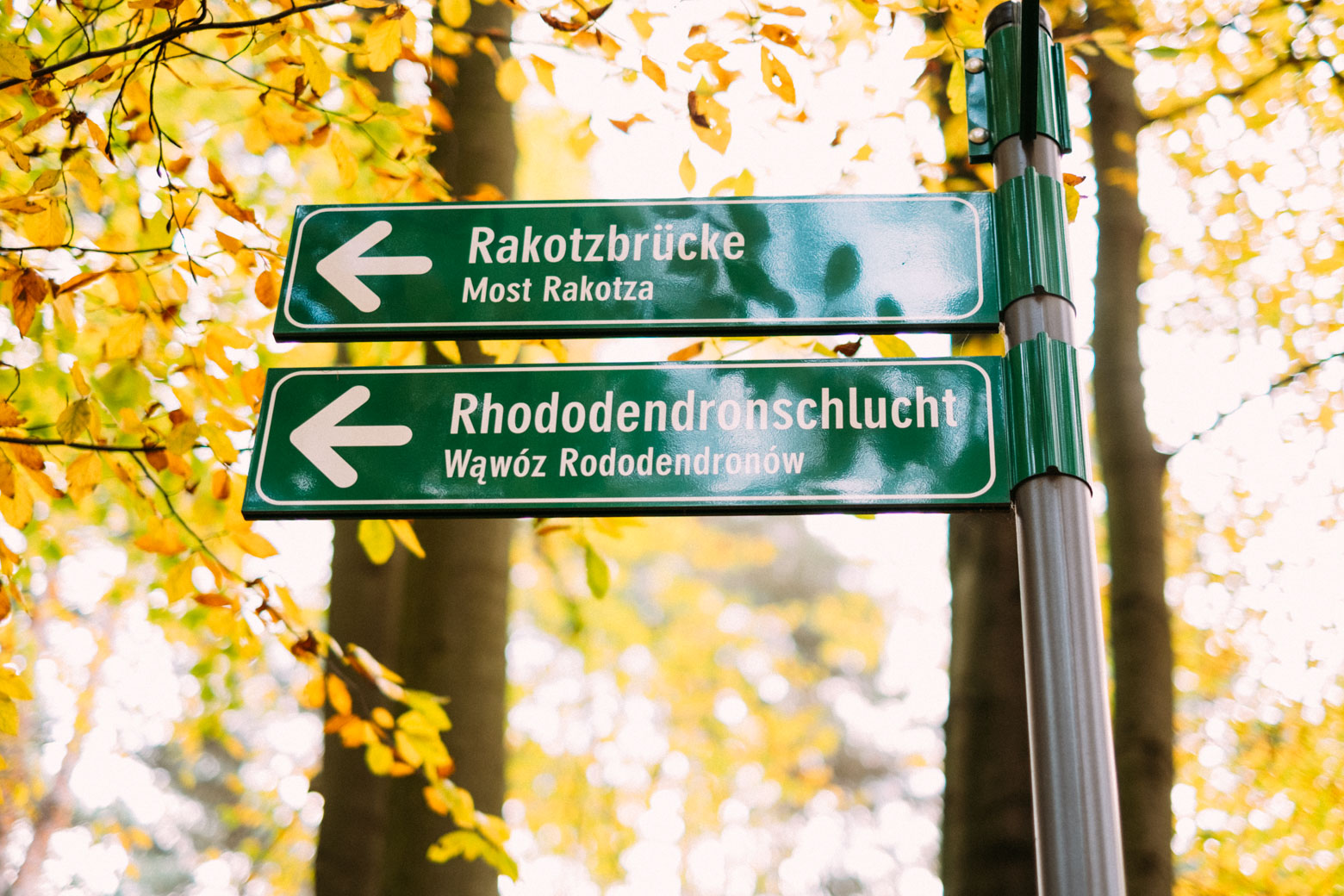 I am so heavily biased, so I have to say: Autumn! If these photos aren’t enough to convince you, I don’t know what will. To give you an idea, these photos were taken at the very end of October, which I think is a really good time to visit – the trees are at maximum color, and fallen foliage blankets the ground in yellow and orange. It’s really like a sea of leaves (several inches thick in some areas).

The only downside to Autumn is that you miss the Rhododendra and Azaelaas, which are some of the prime attractions of the park. For those, Spring is a better bet. Your very best option is probably to come back in all seasons – there are even some amazing views to be had of the devil’s bridge in the dead of winter.

I’ve also visited in Summer, which is beautiful as well but not quite as pretty as the Autumn photos. I’m hoping to visit in Spring this year. 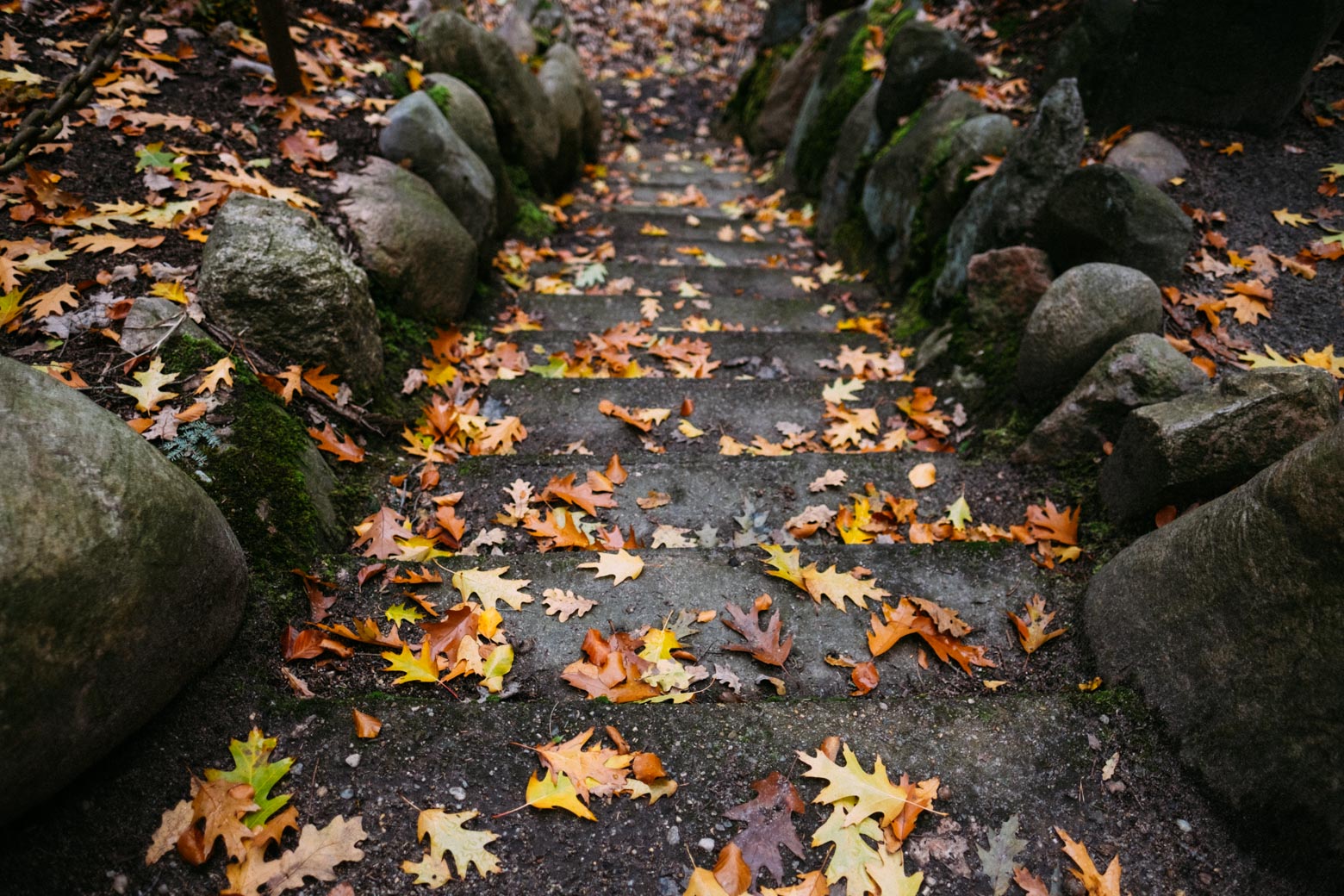 There is also a Park- & Blütenfest (Park and flowering festival) which takes place every year at Pentecost, attracting tens of thousands of visitors. I most enjoyed my experience during “off season” with only a handful of fellow photographers around who were all relaxed about giving each other the time to take pictures from the best vantage points.

Other things to do near Kromlau, Germany

Cottbus is a university city with a little under 100,000 people in it. The old town is very small and walkable, but also not very busy. Cottbus’ main industry is power generation, and is well known for its football team.

Bad Muskau is a spa town, right on the border between Germany and Poland. It’s main draw is the UNESCO World Heritage Park, Muskau Park (which you can also reach with the Waldeisenbahn). It’s one of the most famous English gardens in central Europe.

If you’re looking for more day trips from Berlin, you can check out a related post which explains tons of other beautiful options for day trips. 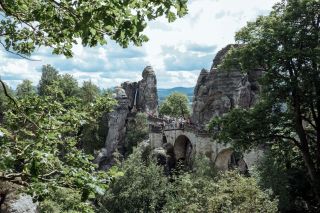 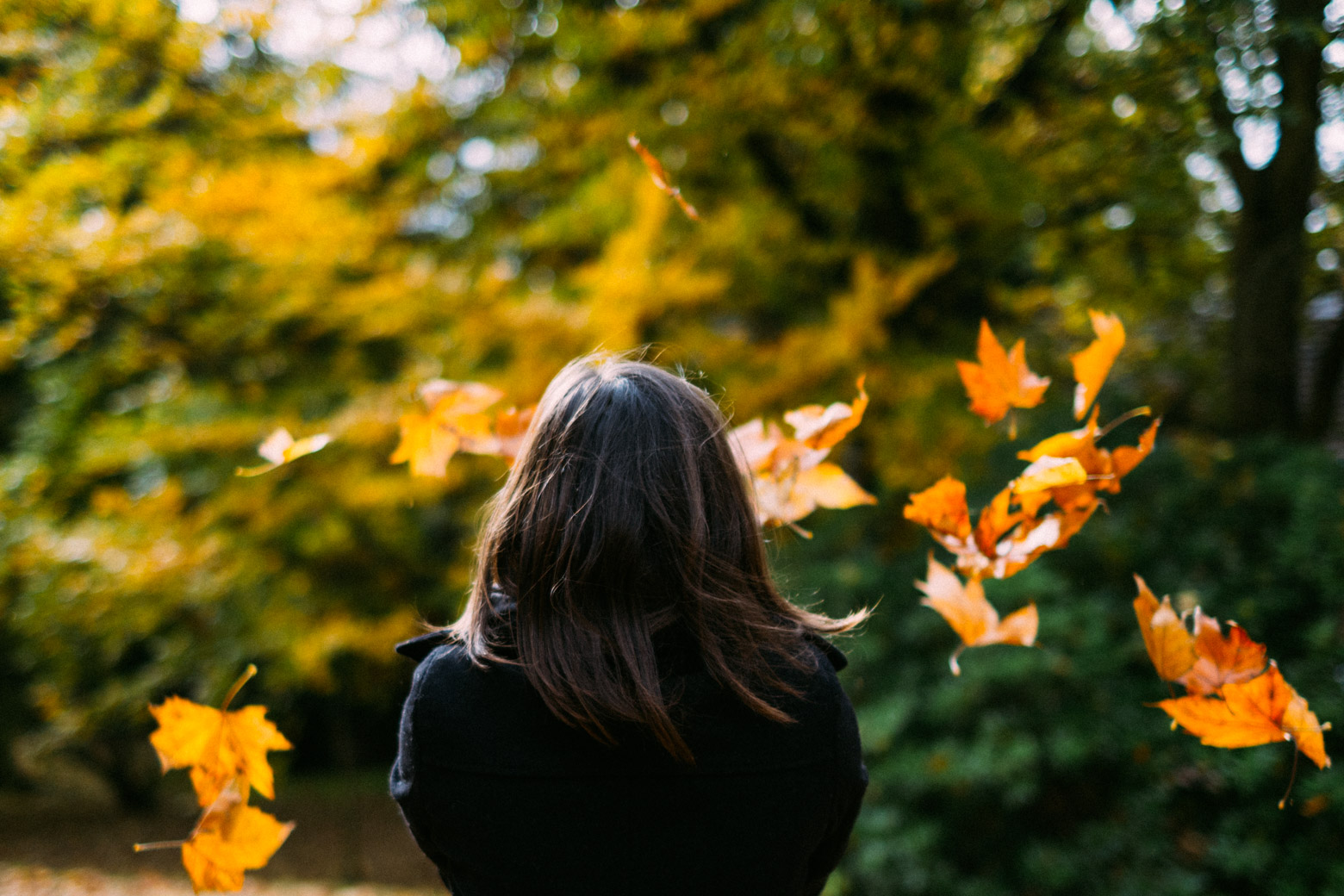 Have you ever seen a devil’s bridge? What the most beautiful man-made structure you’ve seen while traveling?

Please share your story in the comments, I would love to add more of these enchanting bridges to my diabolic repertoire 😉