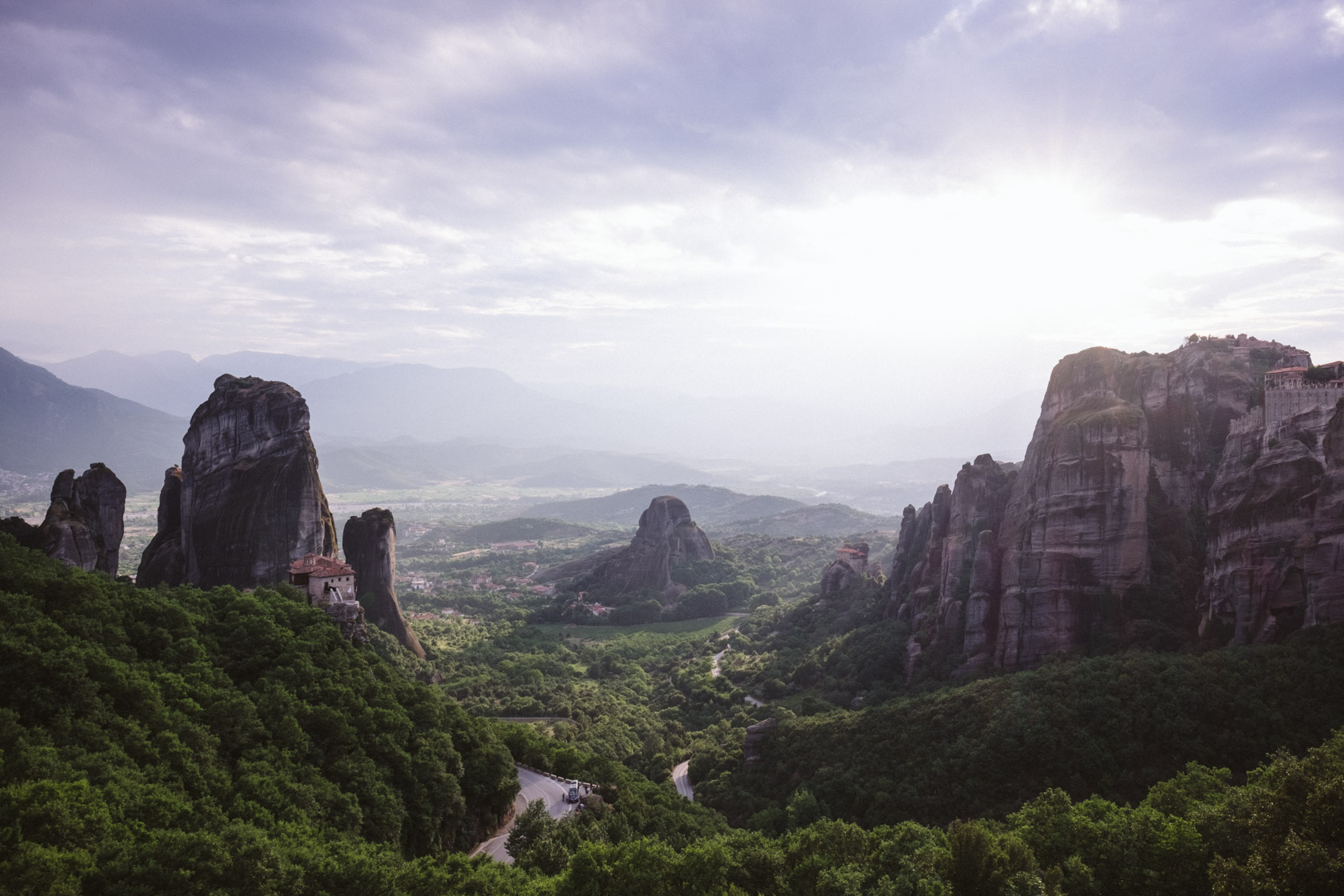 A Super Efficient Guide to Visiting Meteora, Greece in 2022

The mountaintop monasteries at Meteora, Greece are a marvel of human creativity. Can you believe people saw these enormous sandstone pillars and thought, “I’m going to live up there!”? That’s exactly what happened centuries ago, and today you can visit the monasteries that are still inhabitied by 60 monks and nuns. Originally there were 24 monasteries, where today only six remain.

Read on for my guide to visiting Meteora, including when is the best time to visit, which monasteries are worth seeing, where to stay, places to eat, and many more tips to make your trip super efficient!

From March 15, 2022 you are no longer required to fill out a Passenger Locator Form (PLF) prior to flying to Greece. If you have a valid EU Covid vaccination pass (including residents of countries that have joined the EU system), you can simply show that and no additional negative test is required.

Travelers from the United States, Canada, and Australia must have one of: A) Vaccination certificate (same validity requirements as the EU covid pass) which includes the full name of the traveler as written in their passport, type of vaccine given, and dates of innoculation or B) Proof of recovery issued within 14 days of a positive COVID test, valid for 180 days after or C) Negative PCR test up to 72 hours in advance, or a negative antigen test up to 24 hours in advance.

Here are a few tips that will make your trip to Meteora easier:

Sunrise in Meteora, as seen from our balcony at Hotel Meteora Kastraki .

Looking for a full-blown guide for Northern Greece? Check out my Northern Greece Travel Guide and Itinerary for things to do near Meteora. I’ve also written about how to spend three days in Athens if you’ll be arriving in Meteora from the south.

The more you know 🌈 Onto the itinerary!

Duration 2.5 days
Dates visited June 18-20
Recommended accomodation Hotel Meteora Kastraki – Has an unbeatable view, good air conditioning, nice selection for breakfast, and a swimming pool you didn’t realize you needed. And affordable!
Recommended dining We enjoyed Taverna To Paramithi in Kalambaka the most during our stay. They even had live, traditional music played by a pair of old Greek dudes with live instruments!
Recommended guidebook This Greece travel guidebook was super helpful planning our entire trip through Northern Greece.

Every monastery is closed on a different day of the week, except Fridays where two monasteries are closed. This means that if you want to visit all of them, you need to visit over a two day period of time.

Suggested itinerary for visiting the monasteries

Great Meteoron is by far the largest and oldest monastery, the first to be founded. Like every monastery on this list, it has a katholicon (the part of the monastery where monks pray) with paintings of martyrs being tortured and of the final judgement. You should know that orthodox christians were widely persecuted during the Ottoman Empire, so many of the art references this fact. Some special features of Great Meteoron:

Varlaam is the second biggest monastery in Meteora, and considered one of the nicest. What I liked about this place is that you thought you were finished exploring it, and then you discover a new corner where something is still waiting for you! Here’s what you should know about Varlaam:

Monastery of Rosanau is dedicated to St. Barbara, a women who dedicated her life to Christianity and was subsequently beheaded by her father. Today she’s the patron saint of coalminers, and this nunnery in her name has 13 nuns in residence. According to this blog post about the meteora monasteries , Roussanou is both the most beautiful and least visited of all the monasteries.

TIP: You can access this nunnery from both above and below. Above you get a great view over the valley, and it’s probably shorter to walk, however there is less parking available.

Of all the monasteries, I have to say that St. Nikolaos of Anapafsas is the most underwhelming. It’s quite small and for some reason, the stairs to get there were some of the most exhausting! That said, it’s not very crowded, as I’m guessing most tour busses tend to skip it.

Read my article about my travel photography camera kit, which I use to take all the photos you see on the blog!

Almost anywhere you look, there’s an awesome view to be had over the valley. That said, a few places stand out as the best spots to take photos – two main lookout points:

Both of these lookpoints are marked in the map at the beginning of the article. We also found a great lookout point on our way to the lookout point, which isn’t a lookout point but you can pull over and block the road briefly while you take a photo 😉 That point isn’t on any map but is featured in the image above!

The photo below was taken at the Psaropetra lookout point.

When to go to Meteora, Greece

As I shared above, during the high season it’s practically impossible to beat the busses – they are out in force first thing in the morning. However, even with the tour busses, most monasteries didn’t feel cramped and I only really needed to wait in line for one.

For that reason, I do think that June was a good choice for when to visit Meteora. It’s hot but not sweltering, and the busses are there but they actually had a rather small impact on us.

There are also a lot of gorgeous photos of Meteora in Autumn, so I would certainly love to come back and see the valley in fall foliage.

Where to stay near Meteora

We booked Hotel Meteora Kastraki , which is located on its own road a bit outside of Kastraki. This made parking really straightforward, while driving into Meteora took something like ten minutes topcs. The room are rather basic, but the balcony is huge and you can book a room with a view of Meteora (which makes it really easy to get sunrise photos!). The price was also quite affordable at around 80€ per night when we booked.

Even though we drove ourselves in Meteora, I could definitely see how it would be engaging to have a tour guide explain the history to you as you weave around these majestic rock formations. Sometimes you don’t realize how cool something is until you know the history. Adding a trip to Meteora is a feasible option is you’re planning to visit Athens or will be traveling in Northern Greece.

If you prefer to do a guided tour, perhaps because you won’t have a car in Greece or you just want that personal touch, here are three of the top-rated tours in Meteora.

If you’re considering Meteora as an Athens day trips, I would encourage you to see if it’s possible to stay overnight at least one night. Or, at least, ensure that you’ll be in Meteora for sunset.

Have you ever been to Greece? Where would you like to visit most?

I’ve got an upcoming guide to some off-beat parts of Greece and a northern Greece itinerary, so stay tuned!

7 Most Exciting Day Trips From Athens in 2022

3 Days in Athens: Itinerary for First-time Visitors in 2022