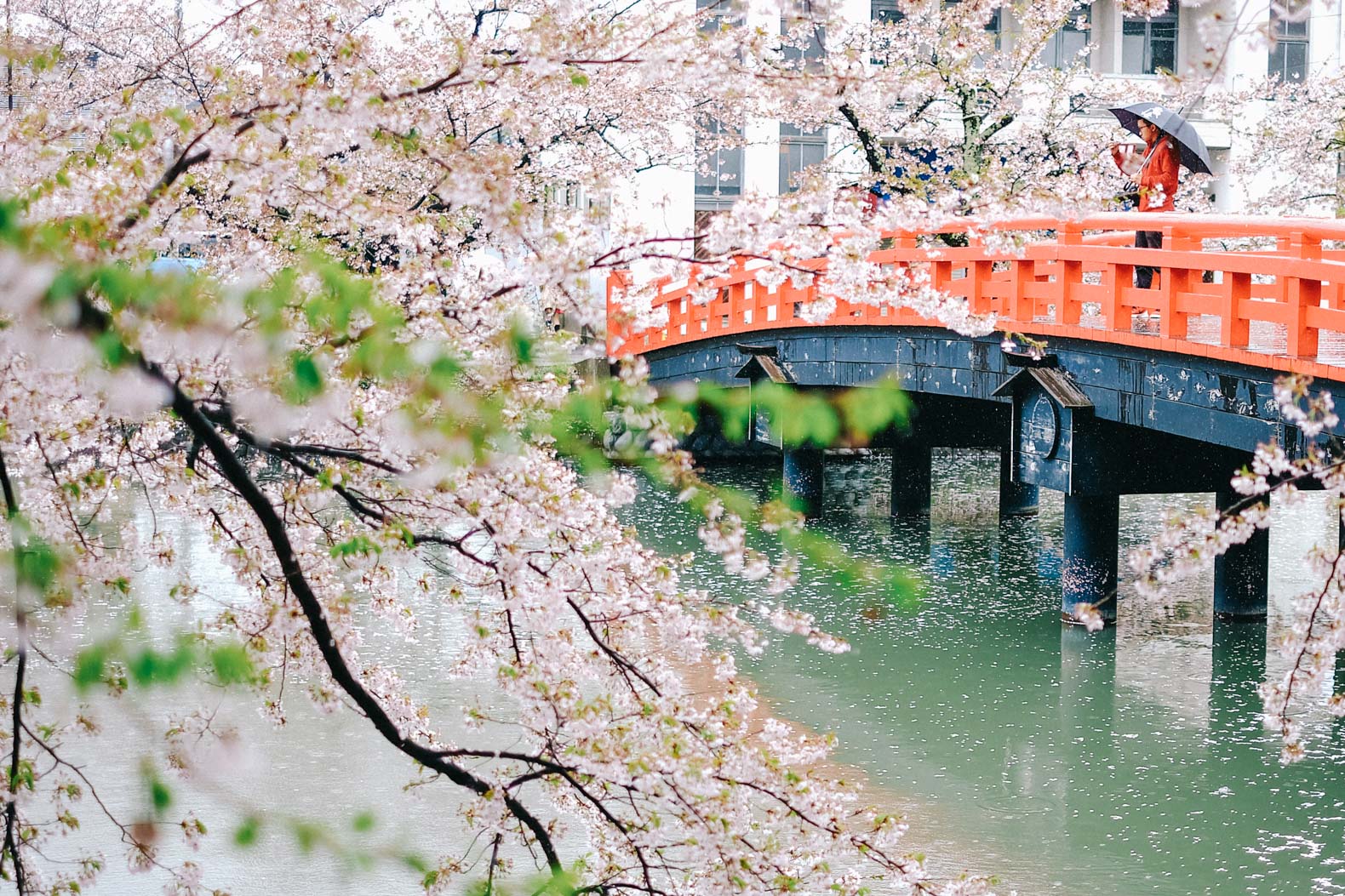 It was showing up all over the world news. Pictures of picnics in Tokyo happening under a canopy of light pink flowers…and they made me panic. The news broke at the end of March, and I’d booked a trip to Japan for the end of April (of course, doing everything last minute). Even my co-workers were asking why I wasn’t already in Japan, because cherry blossom season was in full swing in their hometowns in Europe.

With all the news about trees blooming earlier every year owing to climate change, I worried that by the time I made it, nothing would be left but mushy petals on the ground.

Looking for a complete itinerary for Japan? Check out my related post on spending 2 weeks in Japan!

“If there were no cherry blossoms in this world, how much more tranquil our hearts would be in spring.”
— Ariwara no Narihira (825 - 880)
Tweet this

Japan is still not open to international visitors traveling to Japan for touristic purposes. However, this is expected to change in the coming months, potentially in time for Summer 2022.

According to the Ministry of Foreign Affairs, the only foreigners who may currently enter are those arriving for a short-term stay (under 3 months) for purposes including business and employment.

A brief history of Hanami

Hanami, 花見 in Japanese, literally means, “flower viewing.” Throughout Japan, people gather en mass to look at the trees and picnic (or even camp!) under the trees. The practice dates back centuries, with people first admiring plum blossoms instead (which bloom earlier than sakura). This is called umemi, 梅見 in Japanese, “plum viewing”. But the first time hanami specifically referred to cherry blossoms was in the world’s first novel, The Tale of Genji, written in the early 11th century. Around this time, the Imperial Court began holding flower-viewing parties complete with feasting and drinking sake under the trees. Eventually, the lowly commoners were practicing hanami as well and a national pasttime was born! And since Japan doesn’t have laws against having open containers of alcohol in public, there is nothing stopping you from staying true to the traditional meaning of hanami 🌸 🍶 🌸

For the uninitiated, there are a couple of basic “facts” often disseminated about cherry blossoms in Japan:

Luckily, the truth paints a much nicer picture for people who are trying to plan a trip to Japan to participate in hanami!

5 things you need to know about Sakura in Japan

Japan is a much bigger country than you might expect. Its four main islands, Honshu, Hokkaido, Kyushu, and Shikoku are together 150% the size of the United Kingdom.

I traveled through ten locations on the main island of Honshu, ranging from Miyajima Island in the south to Hirosaki in the north. The drive between these places take about eighteen hours.

From coasts in the south to the Japanese alps — there were cherry blossoms in every single place! Even in places where the peak bloom was more than a month past. How is that even possible? I thought they bloom for a mere two weeks??

Here’s what I learned about cherry blossoms in Japan. 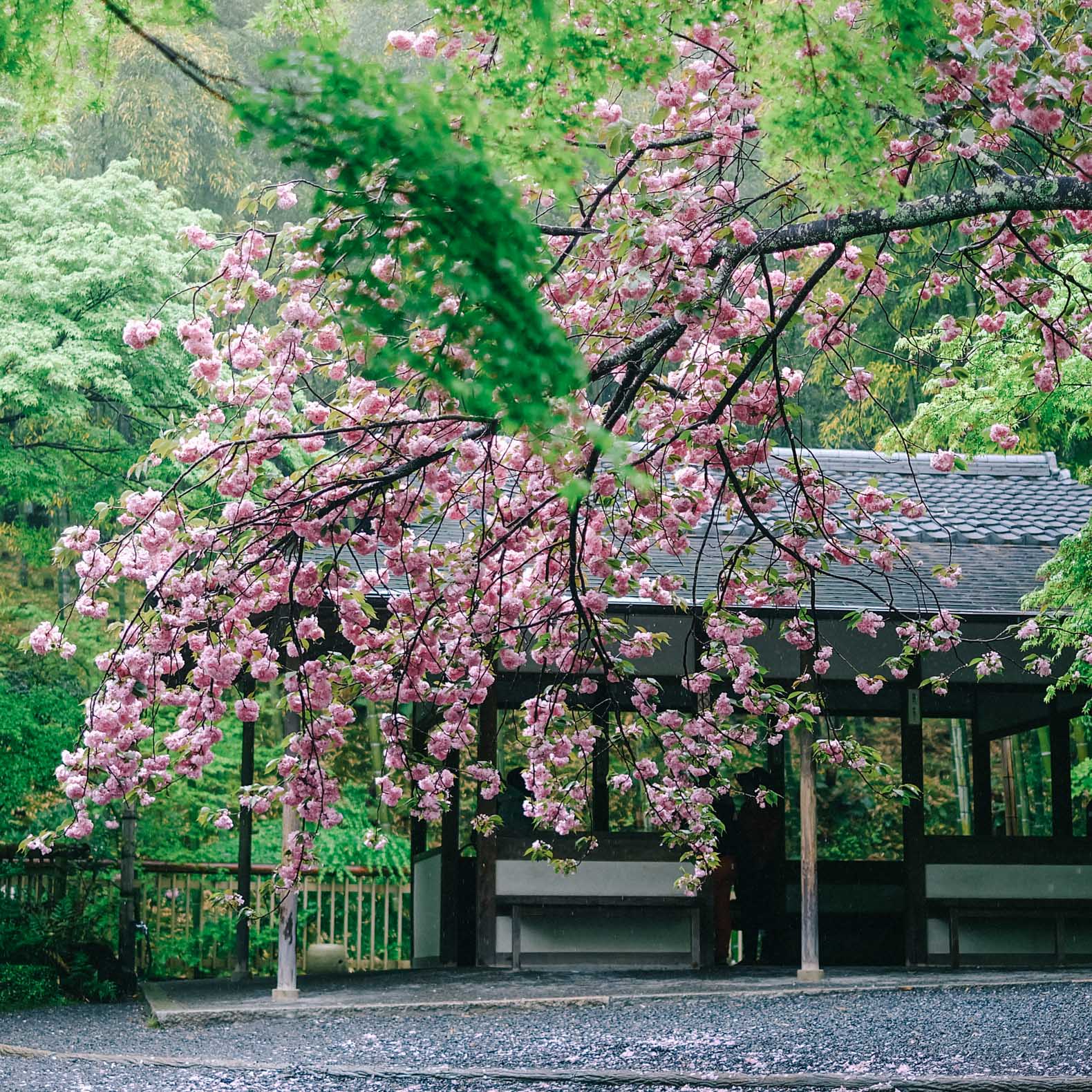 1. Every tree is different

The phrase “late-bloomer” exists for a reason. Cherry blossom trees aren’t connected to each other by some underground communication network. Yes, most trees of a specific variety in a specific place do bloom together. However, it doesn’t mean that you’ll necessarily miss out on cherry trees in bloom because you’re too late. There are many factors that contribute to when a specific cherry tree blooms.

Left: Cherry trees in full bloom at Tenryu-Ji in Kyoto, 21. April (19 days after “full bloom” for the city). It’s most likely so late because it’s one of the common late-blooming varieties. 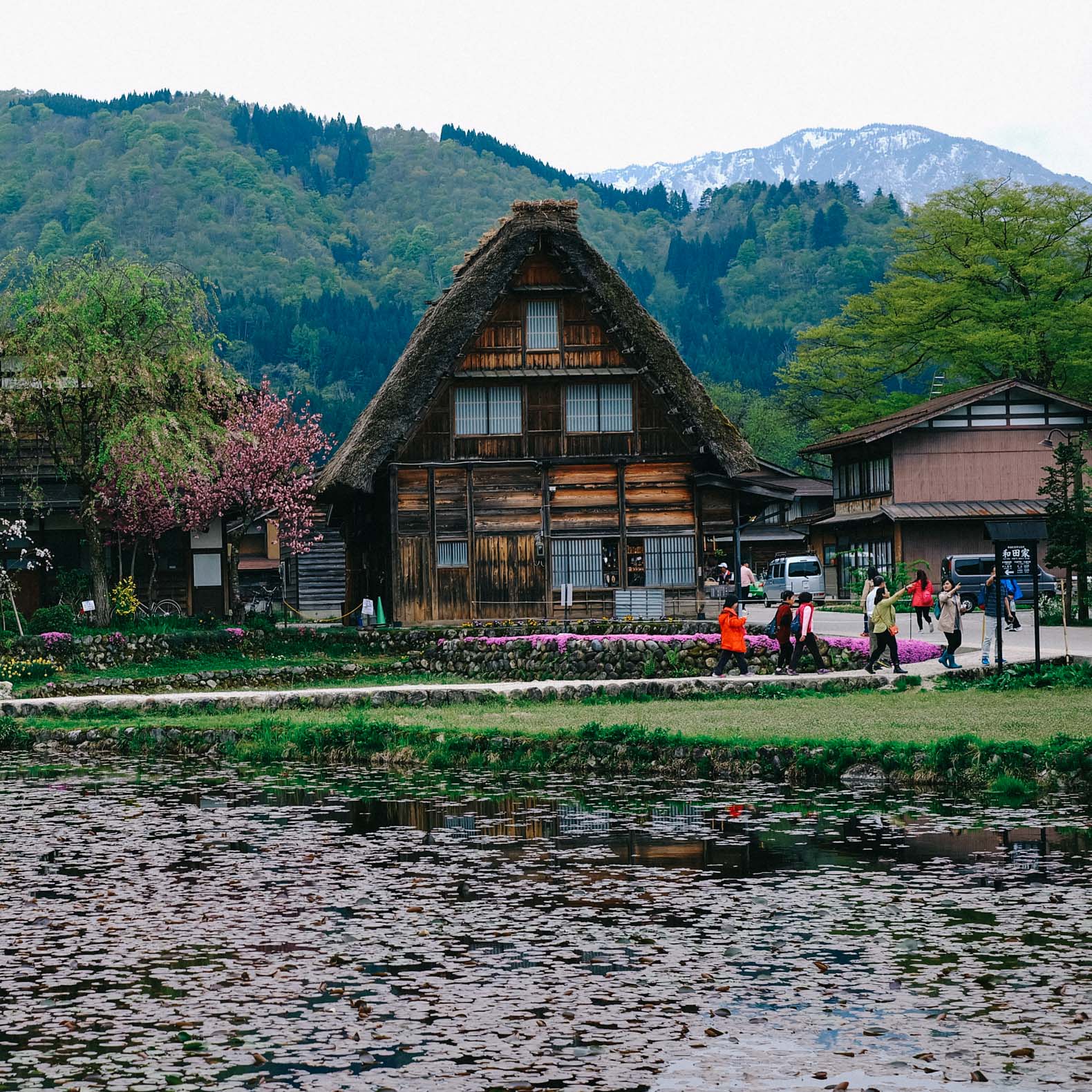 2. Sakura bloom depending on latitude

Sakura bloom over a broad period of time, largely based on latitude. For example, blooming begin in Okinawa as early as January. The “cherry blossom front” slowly moves north over the course of several months, with sakura blooming in Japan’s northern island, Hokkaido, throughout May. This front indicates the opening of the first blossoms, and not the arrival of full bloom (which is often about a week or two after).

This means that any trip between February and May has the possibility of viewing cherry blossoms. That’s encouraging!

Left: Cherry blossom tree in bloom in Shirakawa-go in the Japan alps. 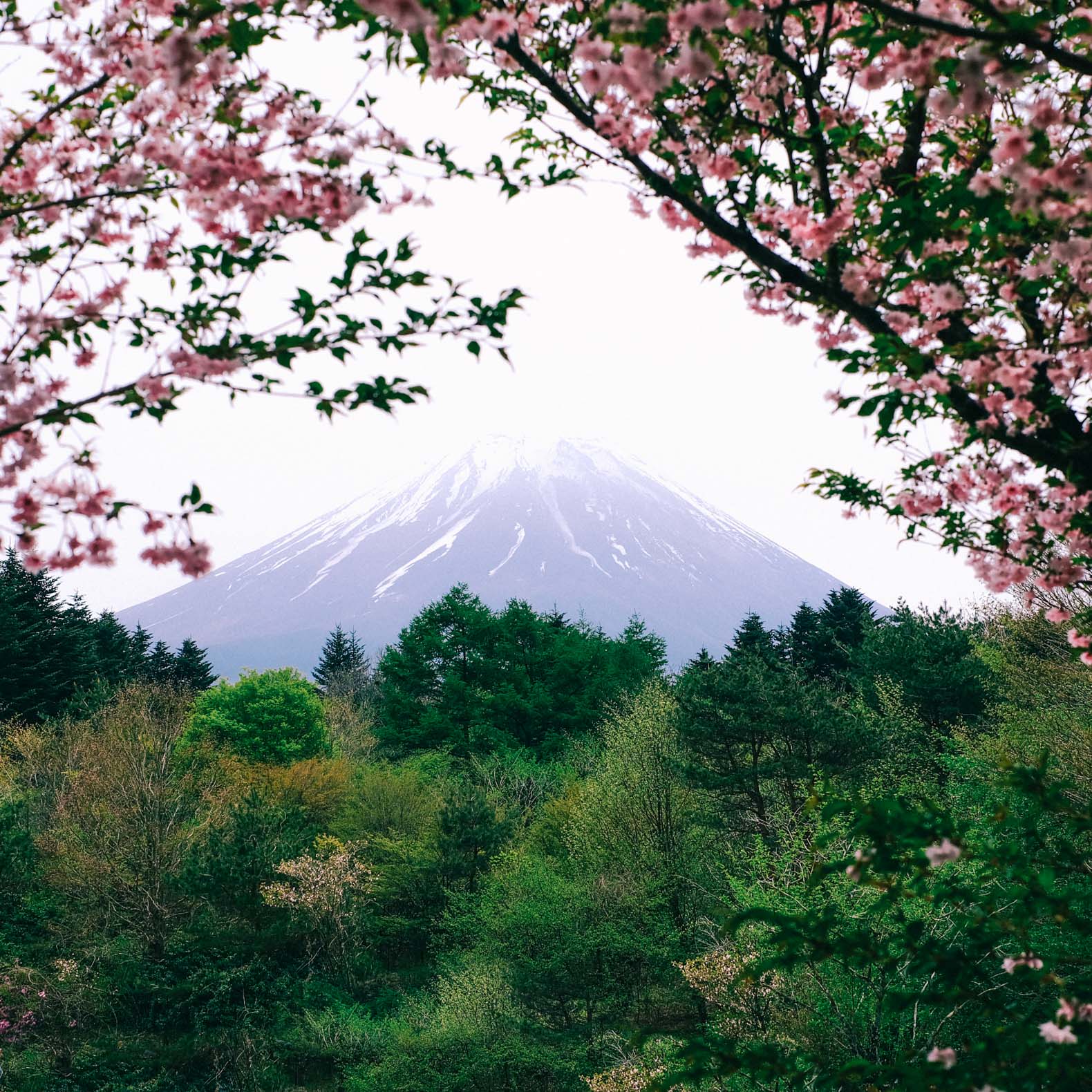 3. Sakura bloom depending on elevation

Latitude is not the only factor in creating the Spring conditions needed for cherry trees to bloom. A more southernly city can have a later cherry blossom season if it has higher elevation (which keeps temperatures cooler).

For example, Tokyo was set to begin blooming around the 21st of March. Yet, at the beginning of May, we saw cherry blossoms in full bloom in Kawaguchi-ko, a town southwest of Tokyo near Mt. Fuji. These trees were largely in full sun, and included varieties that you’d expect to bloom at the beginning of the season. 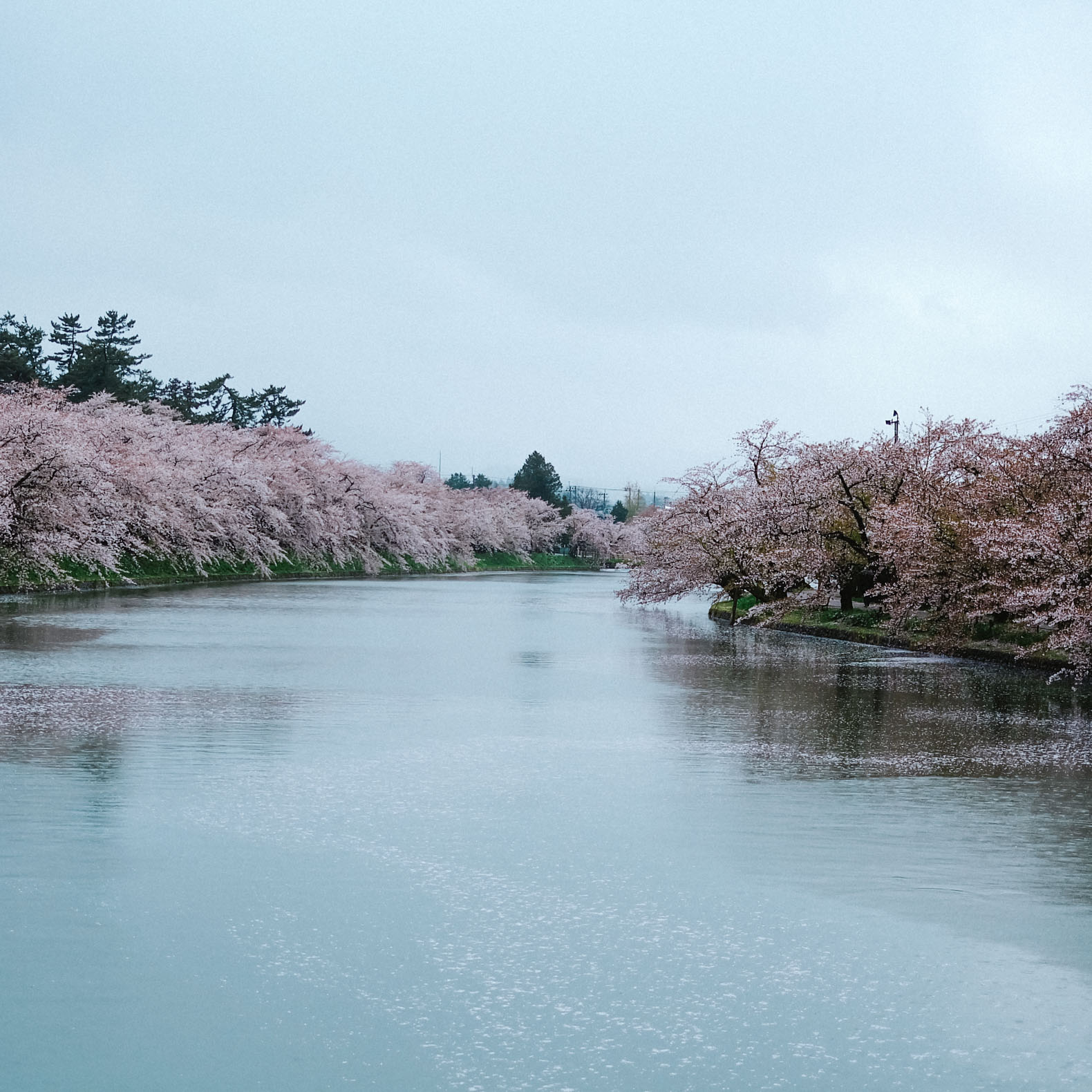 4. Sakura bloom depending on immediate surroundings

A lot of the cherry trees in bloom that I saw in the south of Honshu were in surroundings that either delayed or protected their blossoms. For example, these trees were located in the shade, or shielded from damaging Spring rains by other trees or buildings.

Left: The flowers on the right bank have started to fall before those on the left. My guess would be that the right bank is exposed to more powerful sunlight. 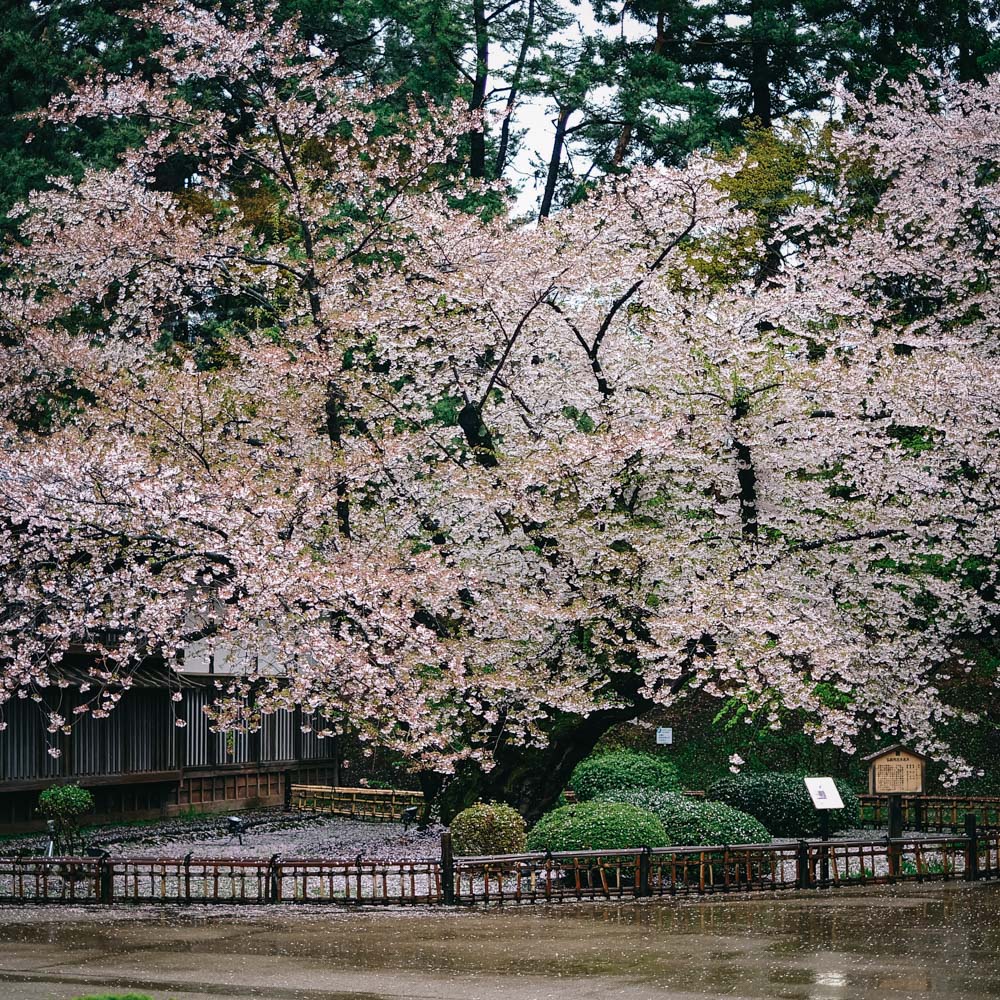 5. Sakura bloom depending on variety

Different types of cherry trees bloom at different times. This is a large reason why you can catch cherry trees throughout Japan at any point during Spring after the first bloom.

Most of the pictures you’ll see of masses of blooming cherry trees are the Somei Yoshino variety, which bloom relatively early.

How to distinguish cherry blossom trees

There are several factors that can help distinguish the type of cherry blossom you’re viewing: 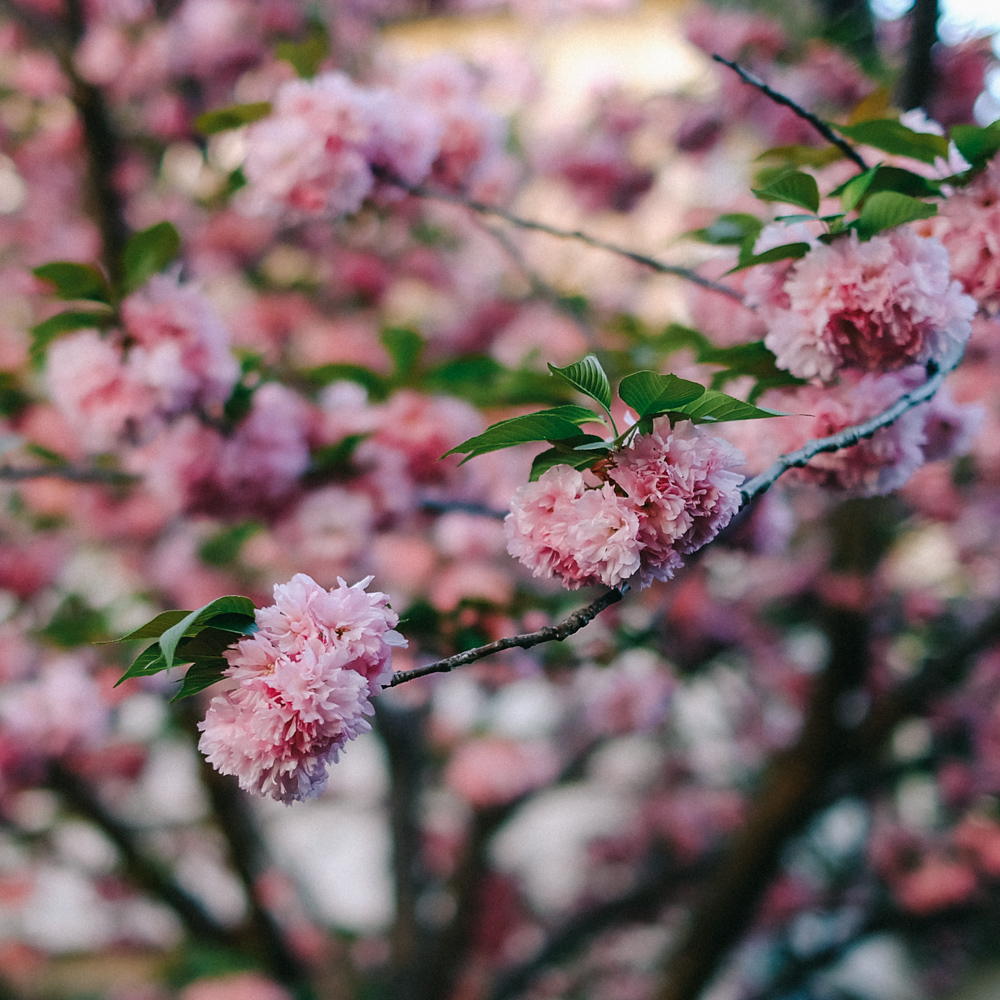 Look for: Number of petals

Typically characterized as having batches of 5, about 20, and about 100. The common Somei Yoshino has five petals. Blossoms with more than five petals are called yaezakura.

Blossoms with fewer petals typically open earlier, whereas those with more than five petals open later by about two to four weeks. This partly explains why many of the cherry blossom trees we saw in the middle to south of Japan’s main island were yaezakura, like the one pictured above.

Left: A cherry tree on Kyoto’s Philosopher’s Path towards the end of April. 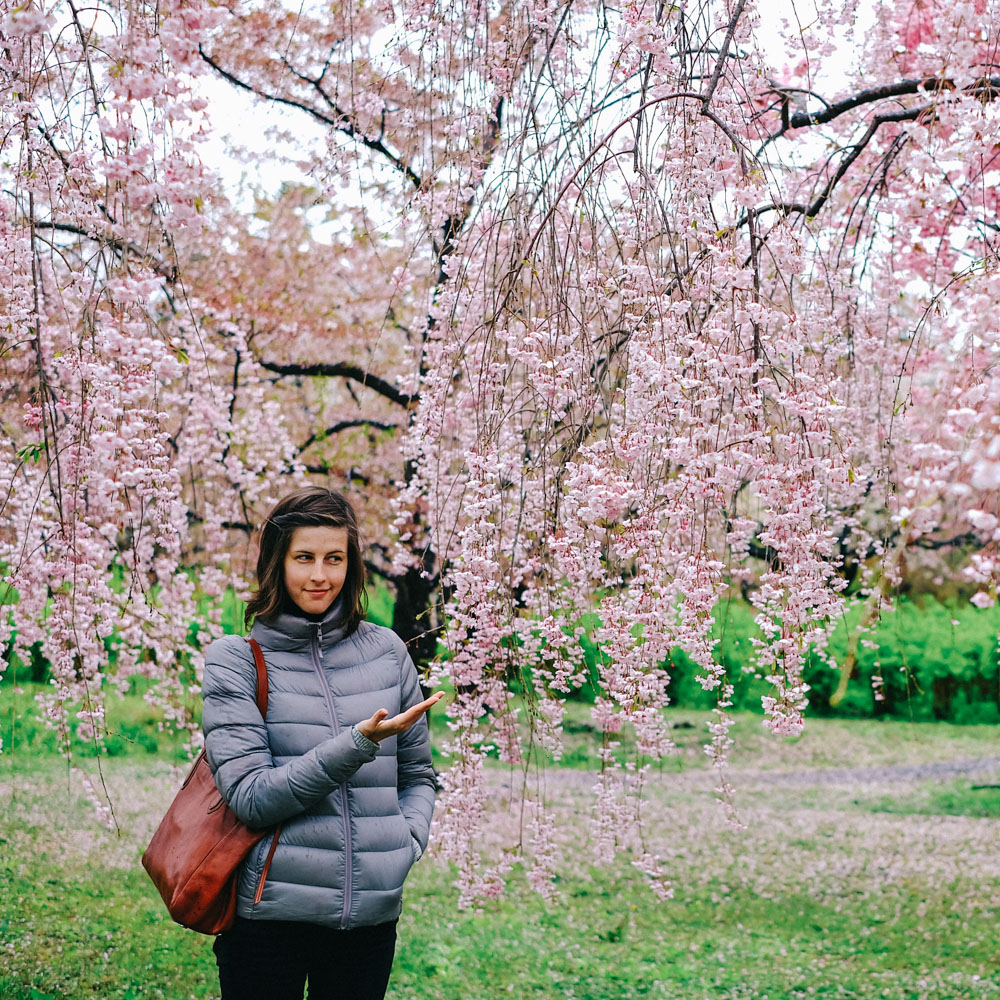 Look for: Shape of the tree

Weeping trees are called Shidarezakura, literally, “Sakura with drooping boughs”. These trees have a long lifespan and as a result can become very large. They are categorized as either having five petals, or having more than five petals. 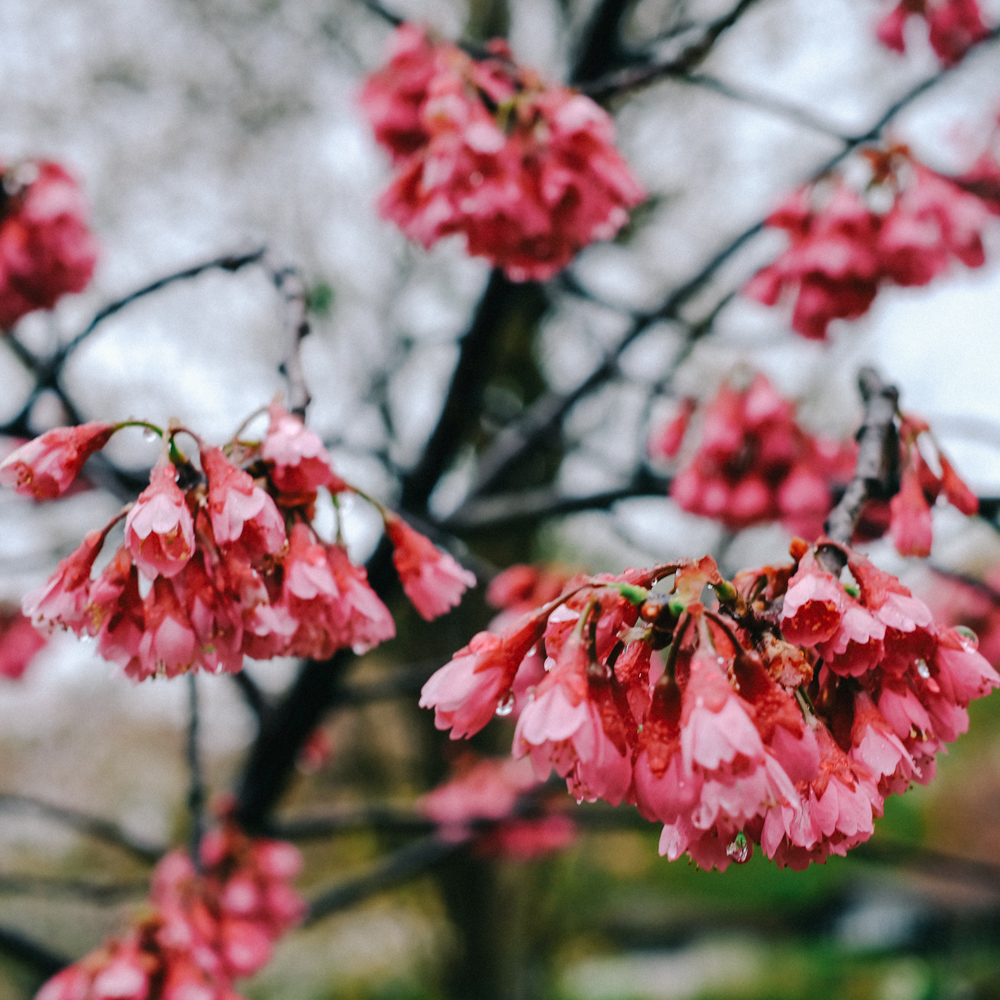 Look for: Color of the blossoms

If you’re like me, you’ve probably wondered why some cherry trees have white flowers and some have pink. For some varieties, it is because their blossoms change color over the course of their flower-lives. But for the most part, many are simply differently colored from the start. Cherry blossoms come in white, yellow, even slightly light green and of course all imagineable shades of pink.

Right: カンヒザクラ Kanhizakura. This species of cherry tree is native to Japan, Vietnam, and China. It’s most famously seen in Taiwan and in Okinawa and other Ryukyu Islands of Japan. This variety blooms a bit later, but still falls into the “early bloomer” batch. 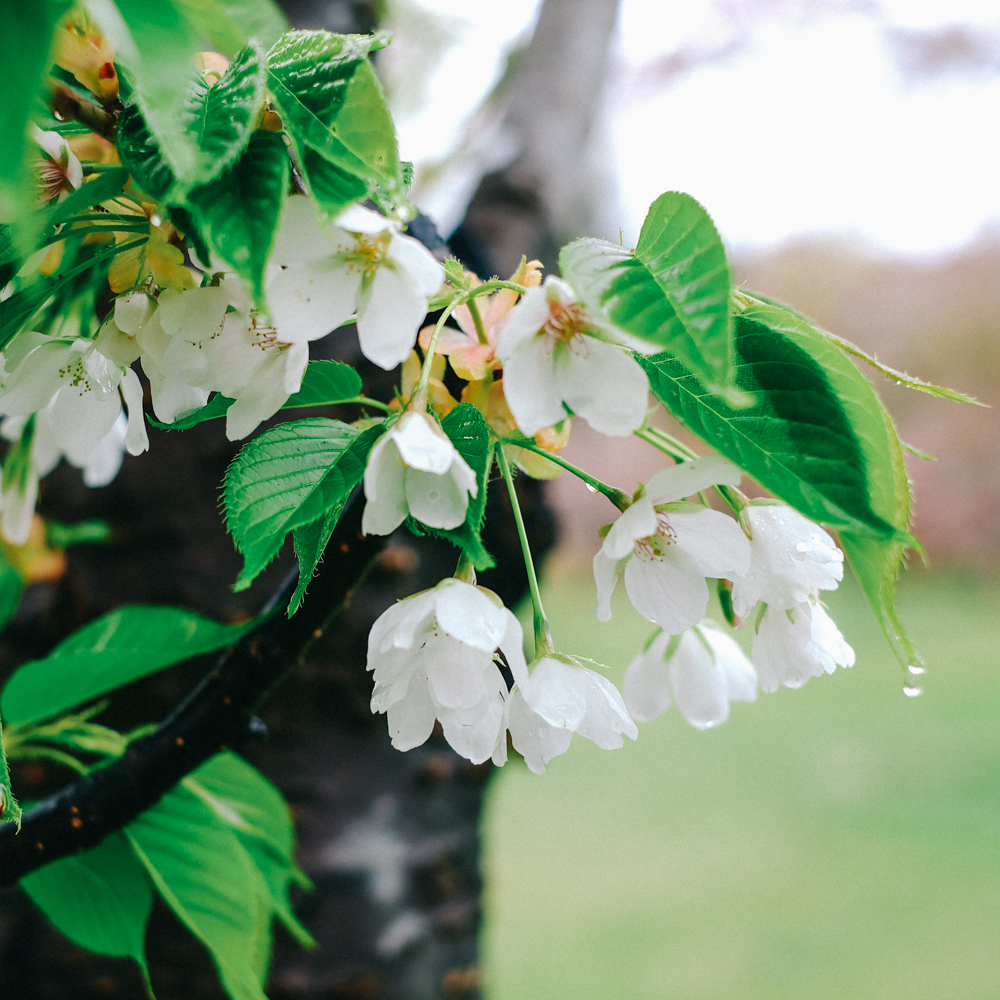 Some trees only grow leaves after the blossoms have hit their peak, which is one of the reasons some trees look so full. Many cherry tees don’t have green fresh leaves, but rather red or copper fresh leaves. 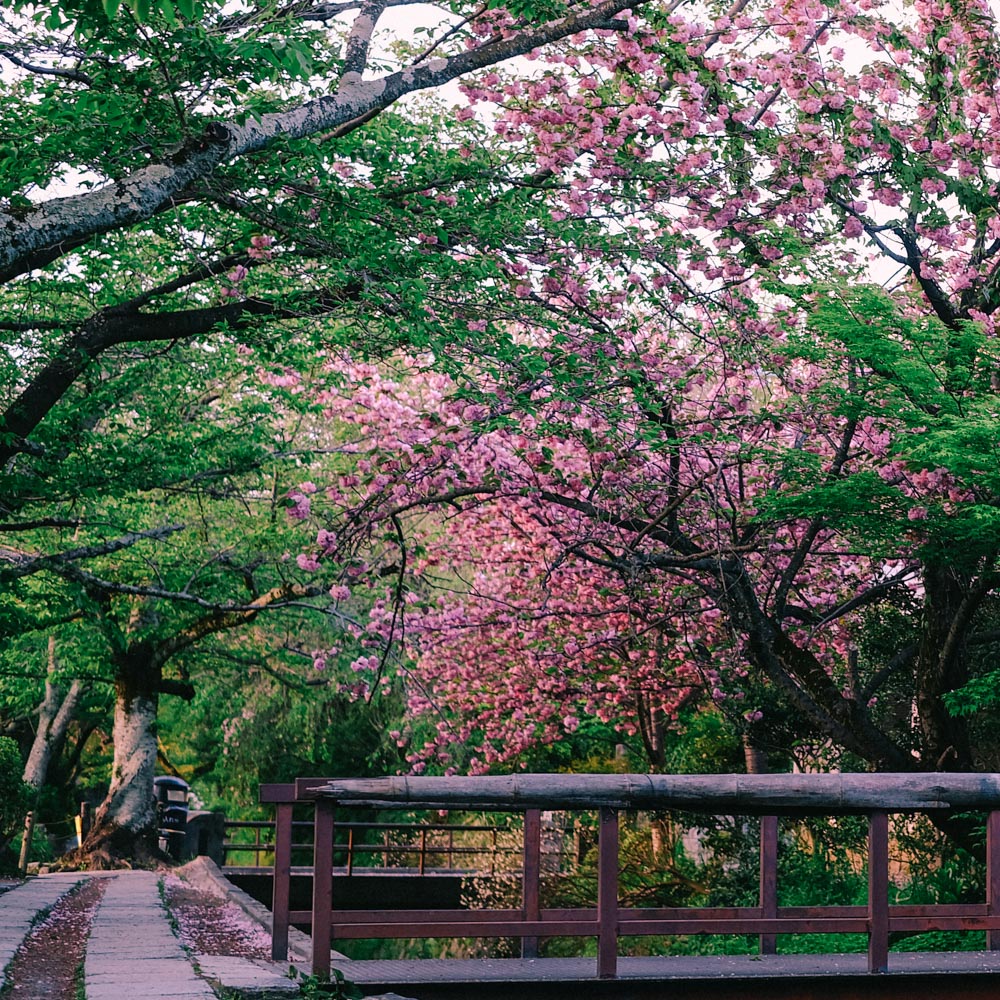 Look for: Time of blooming (relative to surrounding trees)

Different varieties of cherry trees can bloom over a month apart (and in extreme cases, even in different seasons!)

This cherry tree in Kyoto was about 20 days “overdue” for full bloom. My guess is that this is a 菊桜, Kikuzakura, also known as a Chrysanthemum Cherry, because it’s a notoriously lame bloomer, typically popping up in Tokyo in late April to early May.


How to plan a trip to Japan to see cherry blossoms

During cherry blossom season, booking early is more likely to give you a better selection of hotels, but it’s unlikely you’ll save a lot of money. It’s simply more expensive to stay during this season. So if you’re not too worried about getting a hotel with an onsen (which you may get anyways), it’s possible to wait until closer to bloom to commit to which days you’ll be in your target cherry blossom city.

Oftentimes, you’ll be chosing the location for viewing cherry blossoms depending on the time of your trip, and not the other way around.

I chose Hirosaki, Aomori for my main site for cherry blossom viewing. It’s one of the top three locations for hanami in Japan, and hosts over 2,600 cherry trees and more than 50 varieties. I was there from the 29th-30th of April (so, later than the recommended time), and the petals were already beginning to fall from the trees located on the outer moat (as those trees are an early-blooming variety). But a lot of trees were in full bloom, beginning to bloom, and even barely opening. 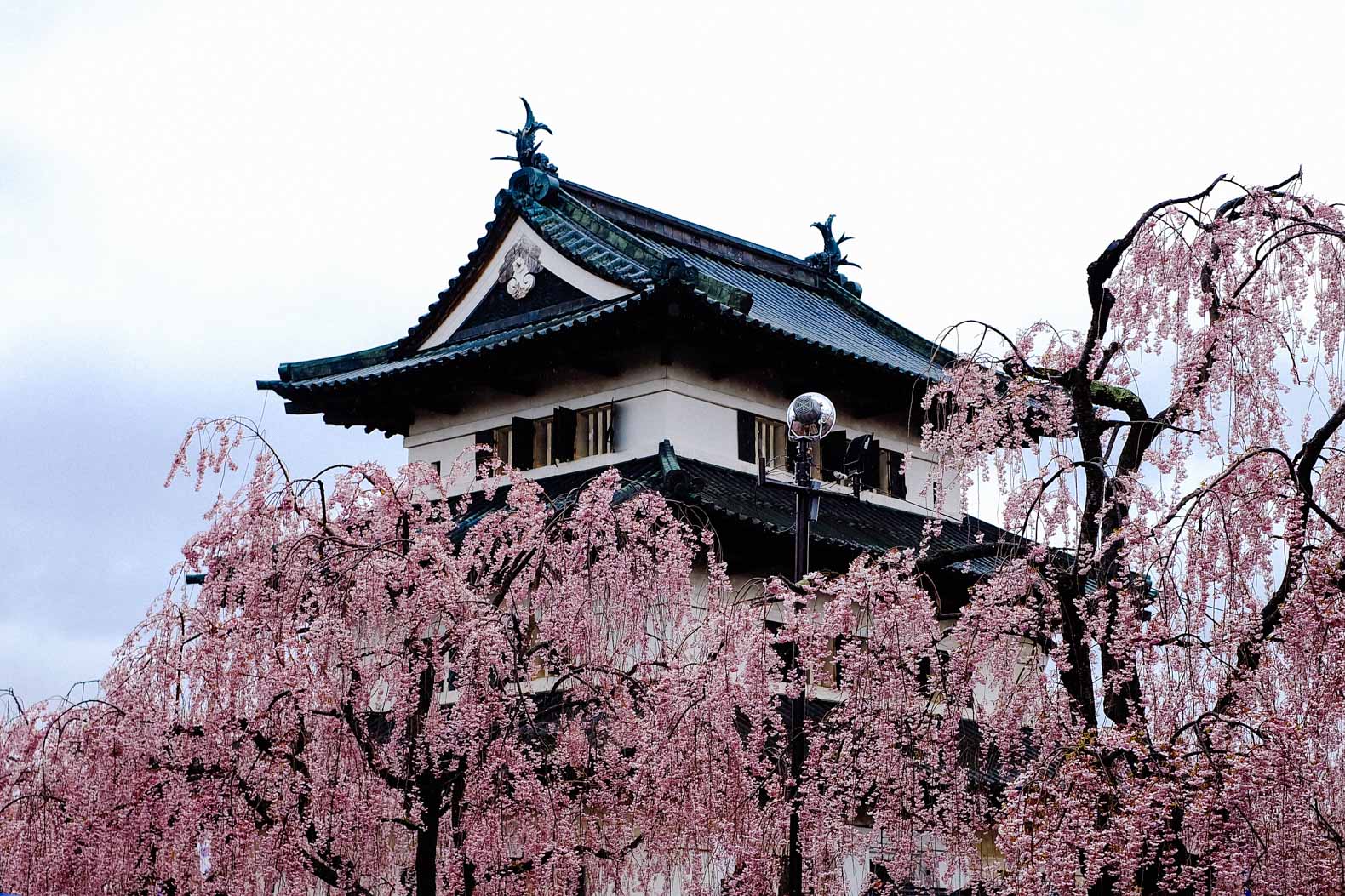 One of the great things about Hirosaki as a location for viewing cherry blossoms, in addition to the sheer number, is the arboreum that’s also located in the park. The trees are labeled, so you can take a picture of the sign and look it up later to learn more.

There are a lot of tools out there to help plan on viewing cherry blossoms. Two of the largest are:

These two websites are constantly updating their information about expected blooming dates depending on weather conditions.

Even more detailed information is often available for specific locations. For example, Hirosaki Tourism’s facebook page is updated daily during the cherry blossom season with detailed reports of what’s starting to bloom, what’s in bloom, and what is falling. If you’re on an extremely flexible trip, this could be the best way to decide when to come.

What to pack for seeing cherry blossoms

Spring in Japan is like Spring in many other places: still cold and still rainy. But in my experience, Japan is even more persistent with its rain. For example, during our ~24 hours in Hirosaki, it rained every. single. minute. Our first day in Kyoto was also rain from start to end.

And when I say rain, I mean rain.


Have you seen cherry blossoms in Japan?

Where and when did you go and what kinds did you see? Which do you think are the most beautiful blossoms? Or are you most interested in the feasting and sake part of Hanami :sakura: 😉 :sakura:

Disclaimer: I’m not an arborist – if any information I’ve provided is incorrect, let me know!